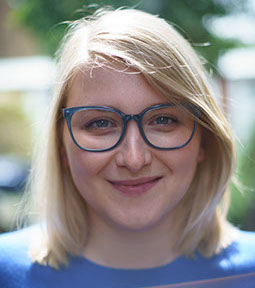 Camilla was born in Vienna with a Danish and Austrian background. She grew up speaking Danish, German and English. Coming from a family full of computer experts, Camilla spent loads of her free time learning different software, editing random footage and designing websites. When she graduated from school in Austria, which was specialising in graphic, web and product design, she moved to London.

In 2011 she started working for Microsoft UK. Her responsibilities were designing presentations, websites and emails, as well as editing internal promotion videos and creating subtitles for global distribution.

The main reason of her move was to become a filmmaker, which is why she started her degree in Practical Filmmaking at Met Film School at Ealing Studios in 2012. There she specialised in her passions writing, directing and editing. During her studies she continued working for Microsoft Austria, remotely from her London home whilst being involved in many different projects as editor and director.

After graduating in 2014 she started working as a freelance film and video editor, while she is pursuing her own film projects. She has worked  with some of the biggest and diverse clients such as Amazon Studios, Google, Levi's, Destination Canada, Red Bull, TAG Heuer and Furniture Village. Her projects span from branded content to documentaries, from short to feature films.

In 2017 Camilla had the great honour to be chosen into
Forbes' 30 under 30 list. Full article can be found here.